Okay, everybody has a pretty good idea how to move in the cardinal and ordinal directions (we do it all the time with minis), and the half-wind directions aren't so hard to deal with, as long as you remember at the beginning of your turn whether you moved orthogonally or diagonally the last time.  But the quarter-wind directions are a little weird.  Did you move two spaces last time and still need to move another one orthogonally before moving diagonally, or did you move three last time and now you move diagonally?  This all gets worse as more and more ships are involved.  It's bad enough when the PCs in their little brig are maneuvering for position against a single pirate ship, but when they're leading the Grand Navy of Poraquis into battle against the Combined Fleet of the Pirate Kings of Amaray, it's going to get more than a little crazy.

The solution is to use a marker unique to each vessel to show where it is going.  For example, we have these two ships, one red and one purple. 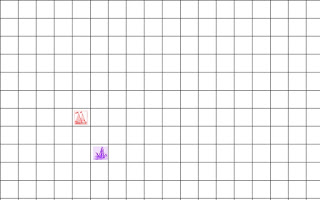 The red one is going to move on a bearing of Northeast by East (two squares Northeast, then one East), while the purple one is moving East by North (three squares East, then one square Northeast). 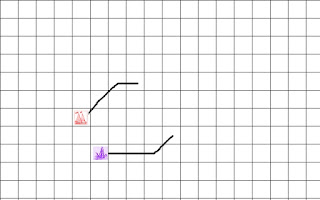 We'll assume that each one has three spaces of movement per turn, so neither one will move this full distance before their turn ends.  How do we make sure they move at the proper bearing over the course of several turns?  We'll count out the full number of spaces we use as an index, and place a marker on it. 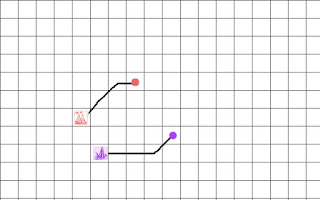 Now we move each ship three spaces worth of movement. We still know each ship's proper bearing because of the marker. 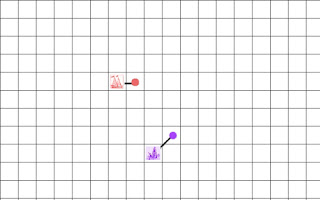 The next turn, during their movement, each ship comes to its marker.  Assuming neither one changes its heading, count out the spaces again, place the marker in the new space, and finish movement. 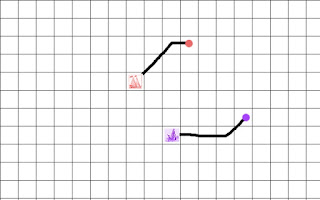 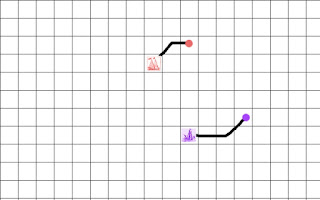 And we can keep doing this until they move off the map. 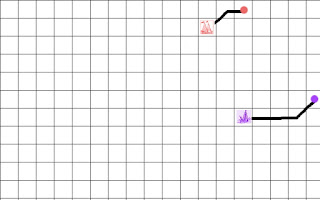 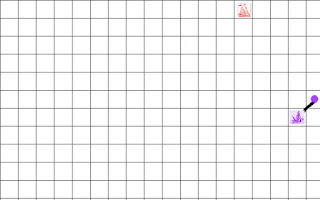 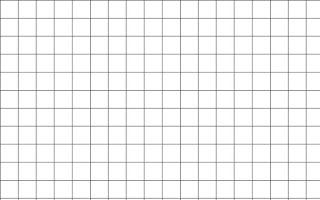 Markers can also be used to keep track of vessels moving in less weird directions, just to be sure everything is going where it's supposed to be going when there are a lot of ships moving around on the table.

I hope this was clear enough.  Feel free to ask questions; I'll clarify the best I can.

ADDENDUM: Of course, these black lines won't be on the tabletop map.  They're only here for illustration.  As long as each ship moves as directly as possible towards its unique marker, it won't matter much if one takes a diagonal move a little early.  In fact, a little leeway as to exactly which path the ship takes to its index marker is recommended; each point on the compass rose accounts for 11.25 degrees of arc, so there's some variation built in already.