So my youngest brother and my sister-in-law came to visit, and as usual when we get together, there were a lot of games played.  I introduced them to Dungeon Crawl Classics, running them through a fairly low-casualty Portal Under the Stars (last time I ran my kids through it, it was a TPK...this time they only lost about four out of twenty).  We combined our Red Dragon Inn characters and played a big seven player game.  But the surprise hit, in my book, was Power Grid. 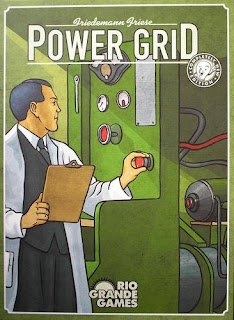 Except that Power Grid totally is.

Now, I'll admit when I first looked at the rules, I was confused as hell.  Player order changes up every turn, sometimes you use normal player order and sometimes you go in reverse order, and there are turns, phases, and steps to deal with.  But going through line by line, we got set up and played through the first little bit, and it became very easy to follow.  And it was fun.

Each turn starts out refiguring the turn order (this is phase one, not to be confused with step one).  Turn order goes by whoever has the most cities in their distribution network, with ties broken by the highest rated power plant.  Basically, whoever's closest to winning goes first, except when they don't.

Phase two is the power plant auction.  The game is arranged so that the power plants available early in the game are less efficient than those available later, so even if every player doesn't want to buy a new power plant each turn, they will want to buy one at least every few turns.  The first player can pass (and then can't buy a plant this turn) or can choose a power plant from those available to auction.  Everyone bids on it until it is sold.  If the player who chose the plant didn't win the auction, he gets to choose again; if he did win, the next player chooses the next plant or passes.  The last guy to go can straight-up buy a power plant at the minimum listed price.  When everyone has bought a power plant or passed, phase two is over.

Phase three is the building phase, where each player can expand their distribution network to more cities.  Early in the game (step one), each city can only have one player supplying it.  In step two, after at least one player has seven cities in their network, each city can have two players supplying it, although the second player has to pay more to set up in that city.  In step three, towards the end of the game, each city can have three players, and again, the third player pays more to set up there.  Phase three is played in reverse turn order.

Phase four also runs in reverse order.  This is when everyone buys the resources they need to run their power plants (coal, oil, uranium, or garbage, although some plants run without fuel).  There is an interesting supply-and-demand mechanic here, where the resources that get used the most end up costing more, while those no one is interested in get cheaper.

Phase five is the bureaucracy phase.  Players get paid for the number of cities in their network that they supply power to, burning any appropriate resources.  The market for resources gets restocked, the amounts depending on the number of players and what step the game is in.  Some updates are made to the power plants available to buy, with the overall effect that cheaper, less efficient plants are available at the beginning of the game, with more efficient plants getting pushed to the end game.  After phase five, the next turn begins at phase one.

Strategy revolves around balancing power plants, networks, and fuel resources to maximize power sold, which maximizes your income and lets you expand and balance some more.  The win conditions are set when one player has at least 17 cities in their network; during phase five of the turn someone expands into at least 17 cities, whoever is able to generate power for the most cities wins.

The game is well-balanced.  Running phase three in reverse turn order gives the people falling behind the chance to buy up some prime real estate and improve their position.  Phase four's reverse order gives the people falling behind a shot at buying the cheapest fuel, possibly stocking up.  Whoever's in first place needs to overcome some pretty steep disadvantages to stay there.  Rather than the horrible, soul-killing grind of Monopoly, where the winner becomes obvious long before the win, Power Grid feels like it's anyone's game right up til the last turn.

Posted by subhuman at 6:31 PM No comments:

Since I "finished" that last project with the swells (said with quotes because I do have a few small comments to make about waves and wave related things whenever I decide to try to organize it all), I've spent some time fiddling with a couple of ideas for Patrons from Dungeon Crawl Classics, and being sick, and having some real life happening.

DCC Patrons are pretty complicated bits of background material, generally involving the creation of four new spells in addition to any back story attached to the Patron, and since spells in DCC have eight levels of success, ranging from barely worthwhile up to much-more-impressive-than-RPGS-usually-allow, they're pretty fiddly. I've often had qualms about making new spells in D&D because of the concept of spell levels.  Is this spell really as powerful as a third level spell should be?  Is it too powerful for second level?  Stuff like that.  Now throw in these eight degrees of success, and someone like me ends up a quivering mess.  And being sick and having real life happening too, I had no chance.

TLDR: I haven't finished any Patrons.

I've seen over on Google+ that someone put together a sort of cheat sheet for DCC spells, listing in general terms the type of outcomes spells should have, based on the examples in the rulebook.  The version I saw only had the first three or four degrees of success listed out, though, and may have only included first level spells; higher level spells should have more impressive successes across the board, at least in my opinion.

And while I pondered (weak and weary) over how to solve this dilemma, inspiration struck.  The Hero System!  Hero has long been called a gamer's toolkit, allowing a GM to build whatever type of world he wished to game in, and players to build whatever type of character they wanted to game in it.  No classes, no set magic system, no set technologies, no limits.  Fifth Edition in particular was advertised as a toolkit for gaming in the sense that it could be applied to other games, not just Champions or Fantasy Hero, but as a way to help standardize new powers in other games too.  Build all the spells in D&D under the Hero System, and any new spells you come up with should go with the existing spells of similar point values.  Or so the idea goes...I'm pretty sure that a lot of D&D spells are of the right level if you analyze them this closely.  But the idea is still pretty sound.

And so, I will look at each degree of success of DCC spells in Hero terms, and hopefully an obvious pattern will emerge.  Then, all these Invoke Patron and other Patron spells will more or less fall into place for me.  And hopefully I won't be off line for a month or more in the process.

Posted by subhuman at 5:27 PM No comments: