I recently posted some black powder artillery and noted that several types were used on ships or boats.  There has historically been a vast array of different types of watercraft, but generally games have given us a pretty stingy selection to selection to work with.  The D&D Expert rules gave us three types of galleys, two types of sailing ships, and four types of smaller boats; these can be made to stand in for a wider variety, but that takes some DM knowledge and a fair amount of fiddling.

As a life-long fan of seafaring adventure novels, beginning with a copy of Treasure Island I got from my great-grandmother, I've always known about the variety of small boats carried on board ships, especially on warships. What did we get in BX to represent this small flotilla of auxiliary craft?  Lifeboats.  And maybe canoes, if you stretched a little.  I don't remember what all ships were provided in AD&D, but IIRC, there were fewer ships and still few, if any, boats.  So, to rectify this situation, and allow the possibility of small boat actions (cutting-out raids, kedging a ship stuck on a mud shoal while under fire, etc), here are some stats for ship's boats and a little clarifying description.


Launch - the biggest of the ship's boats, often used to haul the ship's anchor out for kedging.  The launch is often armed with a gun in the bow (up to minion size) for specific missions.

Longboat - generally used for running people or cargo in to shore through heavy surf.  The longboat could carry a gun up to falconet size in the bow, if needed.

Cutter - a cargo carrier, intended for calm seas or protected harbors. The broad stern of the cutter causes the boat to turn sideways in following seas (waves coming from behind); hard breaking waves can then easily capsize it.  A cutter can carry up to a minion in the bow, but isn't often armed with anything heavier than swivel guns due to its handling.  Not to be confused with the ship-sized vessel known as a cutter.

Whaleboat - originally designed for harpooning whales, often used as a lifeboat.  The whaleboat is double-ended and can be oriented with either end as the front.  This makes them particularly useful for rapid trips to and from shore, as they don't need to be turned around before relaunching.  A whaleboat can carry a gun up to falconet size.

Pinnace - used as a generic small cargo/people carrier.  The pinnace, like the cutter, is another boat that shares a name with a ship.  A pinnace can carry a gun up to a falconet in size.

Gig - a small boat usually used as the captain's personal boat.  A gig is sometimes used by other crew members, but is almost always set aside for the captain himself.  If the captain decides to send the gig out in a small boat action, it can be armed with a gun up to falconet in size.

Jolly Boat - the smallest of the ship's boats.  A jolly boat is a general use boat, carrying people or cargo, or used by crewmembers to inspect the hull from the outside for maintenance or to repair damage.  A jolly boat can be armed with up to a falconet size gun. 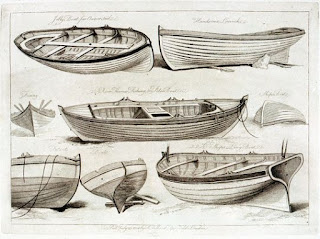 In General - These boats are usually rowed (the Crew listing above gives the usual numbers) at a speed of about half that of an unencumbered human (15' in DCC, 60' in Rules Compedium D&D).  Each boat typically carries an additional crew member in command of the boat (the coxswain, pronounced "COCKS-un").  The boat's rowed speed decreases proportionally as the number of rowers is reduced.  Any additional personnel beyond rowers and coxswain are considered "cargo".

Each of these boats has a dismountable mast and a fore-and-aft rigged sail.  Sailing speed is equal to that of an unencumbered human (30' in DCC, 120' in RC).  One sailor can handle the boat by himself under sail, although the boat is both more visible and less maneuverable this way (which is why rowing tends to the be the default, especially for military type ships).

If the boat is loaded past its capacity, its speed is reduced to half.  It will also wallow like a pig in the waves.  A penalty of -2 or more to any handling checks is appropriate.

Boats are usually carried on the deck of their ship, with smaller boats often nested inside the larger ones.  Sometimes a smaller boat will be hung from davits across the stern of the ship, ready to be quickly lowered.  When a ship is preparing for battle, if there is time, the boats will often be lowered and towed behind to reduce flying splinters from enemy cannonballs.  If the ship is carrying livestock (a common practice for fresh meat, milk, and eggs), they will be put into the boats so they won't panic and create more havoc on the ship.
Posted by subhuman at 6:04 PM No comments: