I posted a bunch of artillery pieces a while back, but gave little or no information about what each one was.  Here is a little more description for each one.

Swivel Gun (Murtherer): I listed this piece with the small arms in the price list and damage tables because it can be loaded and fired effectively by one person.  It is essentially a high powered musket, but is too heavy to be fired from the shoulder.  It is usually mounted along the rails of a ship, at the bow of a boat, or on the walls of a fort, but can be mounted on a wagon or cart, or possibly even fired like a regular musket by a large enough creature, like an ogre.  Murtherers are generally between .70 to 1 inch in caliber.  The number that can be mounted on a given vehicle or fort is left to the individual DM, although I would recommend no more than one every five feet of distance.  The sheer cost should keep the actual numbers in a game well below this level, though. 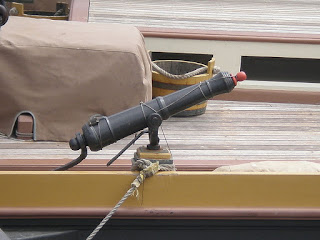 Rabinet: The smallest crew-served weapon on the list, the rabinet is basically a heavier version of the murtherer.  Due to the extra crew member involved in loading this weapon, there should be no more than one per 10' when mounted on a ship.  Rabinets fire a 1" ball which weighs about half an ounce; the gun itself weighs about 120 lbs.

Falconet: These are generally mounted on a carriage, but can be mounted on a sturdy fort wall like a murtherer.  Falconets are used in small, hard to supply forts (easy to pack in, easy to keep supplied with powder and shot) or in larger boats or small ships as chasers (guns mounted in the bow or stern to fire ahead or behind) or occasionally as a broadside weapon.  They fire a 2" ball weighing 1 lb, and weight about 200 lbs including the gun and carriage.

Minion: Minions (and all larger guns) are always mounted on carriages.  On ships, minions are used as primary broadside weapons on small ships or as secondary weapons on larger ships (ships mounted their bigger guns on the lower decks and smaller guns on higher decks for stability).  On land, they are often called Grasshopper Guns for the way they jump with recoil when fired.  They are often used to defend wilderness forts, and are typical light artillery pieces taken out with an army on maneuvers.  Minions fire a 3 1/2" ball weighing 6 lbs, and weigh in at 1500 lbs with carriage.

Quartocannon:  In naval use, quartocannons are medium weight guns, used as primary weaponry on medium sized ships and secondary weaponry on the largest of warships.  In military use, they are the standard size for field artillery.  They fire a 4 1/2" 12 lb ball, and weigh 3600 lbs.

Demicannon: The heaviest guns in general naval use, serving as primary weapons on the largest warships.  On land, guns of this size and larger are usually used as defensive weapons in coastal forts or as siege guns for destroying fortress walls.  They fire a 6 1/2" ball weighing 32 lbs, and weigh 6000 lbs. 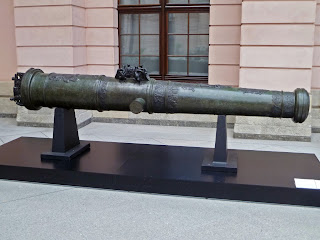 Cannon: Proving too unwieldy for shipboard use, cannons are usually used to attack or defend forts.  They fire an 8" 50 lb ball, and weigh 7000 lbs.

Basilisk: Named (aptly) for a terrible monster, this is the largest direct fire gun in use.  They are almost always used as siege guns by wealthy nations against the mightiest enemy strongholds.  A basilisk fires a 10" ball weighing 90 lbs, and weighs 8000 lbs.

Mortar:  The smallest of the indirect fire guns.  All indirect fire guns have very short barrels with thick barrel walls, and fire an explosive shell in an arc that can bypass walls and defensive earthworks.  The mortar fires a 6" 20 lb shell and weighs 1800 lbs.

Pedrero: Named after a weapon of a previous era which fired stone balls, this is a larger version of the mortar.  It fires a 10" 50 lb shell and weighs 3500 lbs.

In general, all of these artillery pieces come with a carriage (included in the price). Carriages come in two types: field carriages and naval carriages.  A field carriage has high wheels (for getting across ground rougher than a road or level floor) and long trailing pieces on each side for hitching to a team of horses or oxen.  A naval carriage is for use on a ship or fort, where it isn't expected to be moved very far or very often.  A naval carriage has small wheels to help maneuver it for loading and firing (not very good for rolling across grass or dirt), and no trails.

I chose these names and these particular sizes for color and gameability.  There were guns made in all shapes and sizes, and given all kinds of different names, and the names given here were often applied to guns that don't resemble my descriptions at all.  You can ignore all this ambiguity and use just what I have listed here, or you can take advantage of it and have sakers, culverin bastards, and demiculverins which all are functionally equivalent to quartocannons if you feel that it would add something to your game to do so.
Posted by subhuman at 7:27 PM No comments:

I've never made Weapon Mastery tables for the D&D Rules Cyclopedia before.  There are some pretty arbitrary-seeming decisions to be made, especially as far as Primary and Secondary target types.

Well, these may not be up to RC standards, but since I haven't been able to figure out what criteria they used on the RC tables for various weapons, this is better than nothing.  I tried to minimize the funky DCC style dice for this table, but since I already used d5s for the basic fowling piece, d7s snuck in here too.

# Fowling pieces do both dice of damage at short range, the higher of the two dice at medium range, and the lower of the two at long range
Posted by subhuman at 6:01 PM No comments: