I've said before that I've always liked maritime stories and adventures, but something about the nautical mileau as presented in the D&D Expert rules (and later replicated into the Rules Compendium and AD&D) has always left me cold.  I want thundering cannons, or at least a medieval equivalent...broadsides of catapults or ballistae ripping ships to hulks...but what we got in the official rules was a few perfunctory shots by a handful of catapults (far short of a broadside) ending in a massive boarding action.  Sinking an enemy ship is basically impossible unless you capture and scuttle it, have a magic-user to blast it with fire and lightning, have control of a gigantic sea monster somehow, or they just sit there and let you nickel-and-dime it to pieces with your single catapult.

I have recently read Sea Wolves of the Mediterranean, by Commander E. Hamilton Currey, and it endeared me somewhat on the whole situation.  It covers the battles between Muslim pirates and the Christian Mediterranean powers (mostly the Italian city-states) in the 1500s.  And it does have cannons, a lot more than D&D sources would lead you to expect; galleys CAN take the stresses of cannon fire, although the necessary arrangement of rowers means that bow chasers are more effective than broadsides in their case. 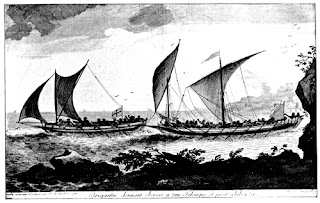 At any rate, it's worth a read.  I still really want better naval combat options, particularly for more "Golden Age of Piracy" type settings, and I'm working on adding some detail to the RC rules that will fit the bill.  Hopefully I can get them all worked out and published soon.  Not least so I can close some of the damn tabs I have open on my computer and my phone.
Posted by subhuman at 9:57 AM No comments: