Locations:
Okay, the party is in Highfield, the nearest village to the Mushroom Tower. They may have heard about more specific locations for the Tower, and can continue to seek out rumors if they need to.  There are some mushroom shaped rocks outside the village, and there are plenty of hills that could be fairy related (Is this one greener than the others?  Do the trees on this one grow taller?  Are the flowers here brighter?).  There is nothing resembling an enchanted lake anywhere near here (see below for details on the lake). 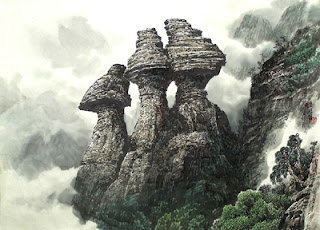 Rivals:
Everyone can see the comet in the sky, and the story of the Mushroom Tower is widespread, so there are a pile of adventurers in town.  The inn is full to overflowing, and every spare room and hayloft in the village is occupied.  Some more ambitious adventurers have set up camp in likely spots for the Tower to appear, and quite a few of them defend their turf against trespassers.  In general, higher level parties are more aggressive in their defense, while lower level parties are more willing to join forces to rout out whatever foul beasts happen to control the Tower.  If the PCs have had rivals or recurring enemies in past adventures, they are probably here now; if not, some of the groups here now will be jerks enough to become rivals soon enough.

General Layout:
The Tower rises from underground, telescoping into a sort of circular ziggurat shape.  It is piled high with earth accumulated over the centuries, shedding it from one level to the next slowly when it rains or quickly when a roof hatch levers open.  (When the Tower returns to its underground configuration, it will take time for this earth to refill the hole; in the mean time, it fills with stagnant rainwater.  There's your enchanted lake.)  The lubrication leaking from between the rings of the Tower's structure fertilizes some pretty strange mushrooms, forming concentric fairy rings; funny how none of the tales mention this.  Talking with some of the local oldsters might turn up this clue, or happening across the mushroom rings might be enough for a knowledgeable character. 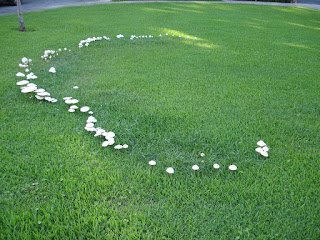 Each ring of the Tower has a mission focus.  The outer ring (Ring V) contains mainly machine shops and bays for parking, maintaining and repairing ground vehicles (in re: the rumor table, tracked vehicles leave tracks that look like many small feet, hence the large roaring beasts with centipede legs; these robotic ground vehicles are used to gather raw materials from the surrounding area when the Tower is active).  The most likely entry for the PCs is one of these bays, either one that has opened to allow a ground vehicle to leave or a bay that has been damaged enough that characters can squeeze or force their way in through a fissure or warped bay door.  The next ring (Ring IV) has bays for ornithopter drones (resembling dragonflies, sadly none are operational).  The bays have hatches in the roof that open outward, causing any accumulated dirt to spill onto the Ring V.  Ring III contains missile silos (resembling arrows of fire when launched, most are empty now).  Every now and then during the early stages of the exploration of the Tower, a missile will launch skyward.  Ring II has barracks, mess halls, medical facilities, and cryosleep pods (if any of these are still operational, they wouldn't be good for PCs to experiment with).  Some of these are modified to support robots (servants of steel and bone).  The center circle (Ring I) is the command station, with rotating radar dish on top (remembered metaphorically as an all seeing eye).

Because all the rings form a disc when the Tower is contracted underground and a ziggurat when extended, every room that has a connection with an interior ring will have two doors, one at floor level and another about 30' higher.  At one point there was a stairway and/or catwalk that allowed access to the higher doors, but much of that has been salvaged and repurposed to keep the Tower running over the millenia.  The lower doors should be locked when the Tower is extended, but some have malfunctioned; if a PC opens an unlocked lower ring door or forces open a locked one, it opens into a black, yawning abyss (about 40' between Rings V and IV, adding 30 more feet for each ring inward).  Exploring down there will reveal the massive machinery used to raise and lower the Tower, as well as the reactor that powers the whole thing.  None of it will be of particular interest, but might prove dangerous for those who don't know what they're doing. 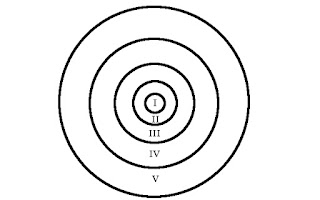 Threats:
Wandering around the interior of the Mushroom Tower is not very safe.  At one point, it was a very well-equipped installation of a space-faring age, but it's been fighting a war for thousands of years without outside help.  To the characters, it is a place of wondrous magic/science, but to modern eyes, it would look like it's held together by spit and string; the chewing gum and duct tape have already been salvaged for more pressing needs.  Malfunctioning equipment lies around every corner, spitting sparks, leaking reagents, or teetering at the edge of collapse.  Even the working machinery has had much of the safety barriers removed to be used elsewhere.  "We need to repair this catwalk if we're going to access the coolant recycler, and no one's going to walk into this ventilation fan anyway, right?  Take the gridding down."

Some likely threats:
- Zombots: Originally the facility was supported by legions of technicians.  Cryosleep kept them alive far longer than their original culture and technological base, but eventually attrition forced them to build mechanical servitors.  Over time, the technicians all succumbed to the inevitable, and now even these servitors are a pale shadow of what they once were.  What were once constructed of plastic and metal are now cobbled together out of whatever materials are available: recovered plastics and metals, but also wood, leather, and bone are used structurally to shield and protect the vital and nearly irreplaceable circuitry and motors inside.  Zombots look horrifying, but are generally only concerned with maintaining the Tower and slowing the inevitable slide into oblivion.  They only attack characters if they are vandalizing the machinery or structure of the Tower.  Treat as zombies or skeletons, except they are unturnable (even the ones made mostly of bones).

- Vacuum tubes: They look like incandescent light bulbs.  They are very hot, and may shatter if touched.  1d4 burn damage/1d6 glass shrapnel damage.  A cascade of these exploding will ruin your day.

- Cables: These snake everywhere, along walls and across ceilings.  A loose one may emit showers of sparks at intervals, and will probably have a zombot on the way to repair it. They deal 1-6 d6 of shock if yanked loose or cut into.

- Massive gears: Used to open bay doors, raise or lower the Tower rings, or move heavy machinery inside the Tower.  If the gears start turning, characters touching them could be pulled in and crushed (save or die situation; a magnanimous DM could allow a character to get away with merely having a limb mangled beyond the abilities of medieval medicine to repair).

- Ventilation fans: Given the current state of the Tower, the ventilation ducts might be the best way into or out of a given area.  The fans might be spinning, or might be stopped, but activate at any time. Either way, coming into contact with them will do at least 3d6 damage.

- Leaky pipes: As ubiquitous as the cables, pipes run everywhere.  Many of them leak whatever they're carrying, whether that's superheated steam or caustic chemicals.  Give them 1-4 d6 of damage, or choose an appropriate spell effect to apply.

- Psychic radio:  An odd machine for communications.  Someone who knows how to use it may connect with another person's mind telepathically (this may allow a spying function similar to ESP if the DM permits).  Someone who doesn't know what they're doing (most PCs, at least at first) will likely suffer some kind of mental damage (loss of intelligence, amnesia, feebleminding, etc, DM's choice).  It is up to the DM how long it takes for a PC to work out the proper use of the machine.


The Final Boss:
Varrtir, the hero of old, is indeed the Master of the Mushroom Tower. He is found seated in the Command Center (Ring I), at this point not much more than a withered corpse trailing tubes and wires.  He speaks to the PCs through speakers in the walls, and displays information on a wall mounted screen.  If the party seems like they will attack, he will attempt to subdue them by flooding the room with a paralysis gas (Save vs Poison or Fortitude depending on system; treat as Hold Person spell).  If he can't parlay, he knows he will lose (he can't physically defend himself anymore...he's over 500 years old!) and will begin an automatic playback that will describe the true nature of the Tower and his plans to end the eternal war with the Celestial Sword.  The only way to end the playback at this point is to methodically destroy the screen and all the speakers in the room.  If the party is willing to speak with him, Varrtir will reveal the following information on his own, answering the characters' questions as he goes.

The tales about him being compelled or forced to take the position after defeating the old Master are false.  He took the position on his own, after learning the true nature of the Tower; at that point, he had already slain the old Master.  The Tower was built in times long forgotten as a defense against the Celestial Sword, which is a ship of fiends from beyond the outer dark.  Or aliens, for a more modern audience.  Through the ages the Tower and the Sword have battered each other mercilessly, with neither being able to gain a decisive advantage as attrition has worn down the capabilities of both sides.  The Tower has had a particularly hard time of it, as adventurers have raided it time and again, thinking they were doing the will of the gods.

Varrtir has a plan to send saboteurs to the Celestial Sword to wreak havoc there.  The same adventurers that have created such chaos in the Tower can surely help to finish off the Sword.  The previous missile launches have been other groups of adventurers.  He may or may not offer the PCs the chance to defend the world; at the DM's option, he may just gas them and send them without consent.

Because the characters are dealing with science beyond their previous experience, and because the players easily understand a lot of scientific ideas and terms, it is recommended that any questions Varrtir answers be couched in strange, unfamiliar terms.  Poul Anderson's Uncleftish Beholding is a pretty good example of real science with strange terms.  This Anglish dictionary should be helpful as well.  Confuse the players the same way their characters are confused.  They should in the end be pretty sure they're taking a rocket to attack a spaceship, but not 100% sure.

If the PCs decline to help, either another party of adventurers does the deed or the aliens win, and with the Mushroom Tower effectively done for, start sending landing parties to conquer the world.

If they decide to help, a zombot will help them to board a missile for launch.

Next time: Part 3 of the Mushroom Tower adventure, Attack on the Celestial Sword.
Posted by subhuman at 2:32 PM No comments:

Probably not the most adventure inspiring river, but interesting nonetheless.

Then again, maybe it is kind of interesting.  For Giant Spring to gush forth enough water to make a river (as opposed to an intermittently wet ditch) there must be what amounts to an underground river there...
Posted by subhuman at 11:25 AM No comments: