Do Not Let Us Miss Today's Deal of the Day

Do Not Let Us Die In The Dark Night Of This Cold Winter is today's Deal of the Day at DriveThruRPG.com.  Only $3, don't miss out!
Posted by subhuman at 9:20 AM 2 comments:

In a memorable scene from the classic adventure The Isle of Dread, the party is wading through a flooded underground temple when they open a door into a dry area and are swept away as the water drains down into the cavern below.  At least, that's how the circumstances are set up; I suppose some parties get lucky or have made better plans based on paranoia, divination, or secretly reading the adventure beforehand. 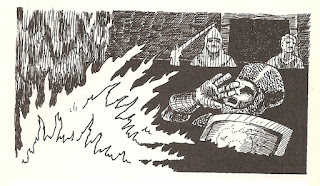 It occurred to me a while back that Robert Manning's equation could be used to figure out the flow rate of water moving in a man-made channel (like a dungeon corridor) and I thought it might be fun to compare my cursory knowledge of fluid mechanics with the wild guesses of David Cook and Tom Moldvay.

So here's the map: 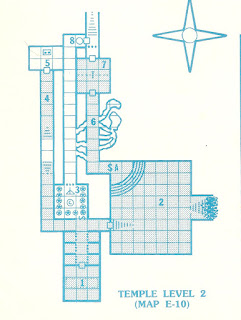 We have 101.5 10' squares filled five feet deep with water (most of area 2 is deeper than that, but only the top five feet is able to drain off; also the half square comes from the stairs leading up and over the dry section of corridor into area 4).  Once the door in the north wall of room 7 is opened 50,750 cubic feet of water starts draining down the stairs into the cavern below.  The adventure estimates that the water will flow for two minutes, or 12 ten-second rounds.  Let's see what Manning has to say.

Manning's equation requires us to know the cross sectional area of the "river", which in this case will be the width and depth of the water flowing through the doorway.  It also requires the slope of channel the water flows down, and the "Manning's n" value representing the friction the channel exerts on the flowing water.

My previous spreadsheets used a triangular cross-section to represent the shape of a natural stream, with shallow water by the banks and a deeper channel further out.  Because this is a man-made corridor, with floors and walls squared off, the numbers are going to come out a little differently, and a lot easier.  The cross-section of the stream will be the width of the doorway multiplied by the depth of the water, while the wetted perimeter will be the width of the doorway added to twice the depth of the water (see diagram).  No Pythagorean theorem here! 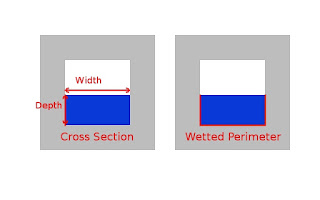 It should also be noted that this water isn't being replenished from groundwater or rains far upstream.  As it flows out, the level of the water will drop, which will affect the flow rate as both the cross-section of the stream and the wetted perimeter drop.

The hallway that the water will drain down has about 40 horizontal feet worth of stairs.  We'll assume that this temple/cavern complex was built according to standard US building codes, and the stairways are made up of 7 inch risers and 11 inch treads, for a slope of .6363 (repeating).  For what it's worth, that puts level 3 about 25 feet below level 2.

Normally, in a dungeon passage carved from stone, I would assume the flow channel is pretty smooth, and choose a low value for Manning's n, but the description specifically mentions all the dangerous debris hidden in the water for characters to stumble and hurt themselves on if they're not careful, so I'm going to go with 0.035 here.

I'm going to assume that the door here is eight feet tall by three feet wide.  That's pretty big for a regular interior door in a home, but houses don't typically have 10' wide and tall passages either.

And with that, we can start looking at the flow rate through the doorway.  Punching it all into the spreadsheet gives us a flow of 37 feet per minute, or about 6 feet per 10 second round.

That's not fast at all.  What went wrong here?

I'm going to guess that this slow rate comes from the fact that the formula is supposed to be for a steady flow, whereas this is water suddenly released.  That slope we got above is pretty steep for a natural stream, and 6' per round is pretty fast compared to some of the flow speeds we've looked at earlier, but consider this: at the instant the door is opened, the water in the doorway extends ZERO feet past the doorway and 5' high, giving it infinite slope.

Well, infinite slope doesn't help out a whole lot either.  There's no way to input infinity into the spreadsheet without getting a Division by Zero error, and even if you could, you'd just get infinite flow, which is as absurd as the leisurely 6' per round flow.  Just pulling a number out of the air, let's go with slope equal to the depth of the water, or 5 in this case.  That's a pretty significant jump from .64 without getting too crazy.

So with a slope of 5, we end up with a flow rate of 105' per minute, or 17.5' per round.  That's plenty to sweep the character opening the door into the portcullis beyond with a fair amount of force. Maybe not 1d4 damage worth of force, although getting knocked down by suddenly gushing water combined with the debris strewn down the passage might account for that.

At the end of the first round, then, the flooded area has drained off (3' x 5' x 17.5 =) 262.5 cubic feet of water.  That's pretty negligible compared to what's there, so it's going to flow like that for several rounds.  To drain off a single foot of water would take over 10,000 cubic feet of water, so we don't have to recalculate the water depth just yet; five feet is still close enough.

The water in that corridor is going to slow down somewhat.  The corridor is wider, so a lot of that energy is going sideways.  If the water has shot out 17.5' and settled into the 10' wide corridor, the total amount of water that has drained in the first round will average about 1.5' deep past the door.  Round 2 begins in this situation.

In round 2, punching in the numbers in the spreadsheet (assuming a slope equal to the water depth since there's no previous sustained flow) gives a velocity of 57' per minute, or about 9.5' per round.  That starts the flow down the stairs, but let's keep it simple and not take that into account just now.  The front edge of the water flow is at 27' past the door.

Looking at the door, now we have some previous flow, but not sustained flow; there's still more water pouring out the door than there is on the other side.  The flow will slow down, but still not be as slow as a regular stream.  We've been taking the depth of the water as the slope for water flowing into a dry area, so let's take the difference in water depth for this situation.  Five feet inside the door vs 1.5' outside the door gives a slope of 3.5, which then gives a velocity of 87.6' per minute, or 14.5' per round.  In this round, 217.5 cubic feet of water drain from the flooded area, for a total drainage of 480 cubic feet. At this point the water past the door averages 1.8' in depth.  Let's call that 2'. 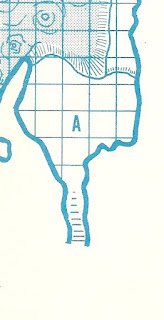 For round 5, all the inputs remain the same.  The front edge runs out to 67.5' past the door, and starts spreading out into the cave.  At this point, I'm going to assume that the flow is established down the stairs.  The depth of the water doesn't add to the slope anymore, given that there's water all the way down now.  The water will continue to spill into "dry" areas on level 3 until it goes over the edge into the mud pits, but I won't bother tracking it per se.

Water comes through the door at a rate of 217.5 cubic feet once again, increasing total drainage to 1117.5.  The average depth down the corridor is still about 1.5'.

At this point, the water levels reach a pattern of slow but steady decline, with the water running down the stairs remaining at just under half the depth of the flooded area of the dungeon and water velocity dropping proportionately.  It takes just over 10 minutes for the water level of the flooded area to drop below four feet, and nearly a half hour before it drops below three feet.  By the end of an hour, the flooded area is down below two feet, and after a total of two hours of draining, it's down below a foot, with the water running down the stairs just a few inches in depth and the velocity of the water only about 1/4 what it was during the first rush as the door was opened.

I'm not going to run the numbers past this, because while it's somewhat interesting as rapid changes occur, it's very tedious once everything slows down and the numbers quit changing as fast.  I tried changing scales, and when I went from round by round to minute by minute it worked out okay, but trying to scale up to 10 minute blocks makes things go all weird.  Somehow the water (according to the numbers) starts running in spurts, with the depth in the stairway going from almost nothing to deeper than the flooded area.  Well, after two hours, even the shortest halfling is in no danger of being swept away, and it's safe to say that some noticeable water flow will continue for a day or two afterward, probably long after the PCs have finished looting and left the place forevermore.

For what it's worth, I'm adding a page to this river spreadsheet to work out flow rates in square-bottomed corridors, in case anyone ever needs to flood a party of PCs out of a dungeon.