For the last several years, Daniel Bishop, aka Ravencrowking, has offered a mathom on his birthday (sort of a reverse birthday present, in the tradition of Tolkien's hobbits) for anyone who would write a review of a Dungeon Crawl Classics product and publish it on a blog or message board. I've been aware of this for at least a couple of years, but didn't participate for reasons which can probably be best summed up as "I'm not worthy."

However, overall participation has been down enough to make him question whether it's worth his time, as few people seemed interested. Well now, I'm always interested in good game material, and rather than being misconstrued as apathetic I am reviewing one of my favorite DCC adventures in honor of Ravencrowking's birthday. Happy birthday, Mr Bishop.

I'll try not to drop any major spoilers, but there may be a few of them ahead. Be forewarned.

Fate's Fell Hand is an adventure for 4-8 2nd level characters (there are options to adjust the difficulty for characters of levels 1-4), and tells the story of a three-way war between rival wizards in the Valley of the Magi, a pocket dimension. Three adventure hooks are given, geared toward different classes, and representing the efforts of the wizards to break the stalemate by bringing in allies. 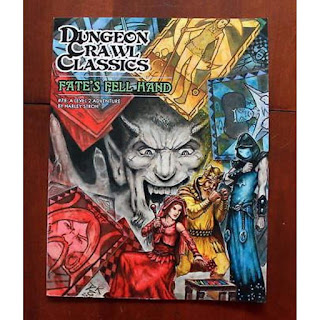 The magical forces involved in reaching out to the PCs and bringing them into the pocket dimension destabilizes it, so now, not only does the party need to decide who (if anyone) to support, they need to resolve the situation before the whole place is dissolved into primal chaos.

Each day, the three wizards are assigned minions, whose free will is largely overridden by the commands of the wizards. Any minions who die are raised again the next day, often just to die once more. Player characters who aren't careful can be drawn fully into the conflict as minions, although they can twist the intents of their temporary masters to their own ends; daily resurrection also applies to PCs who become full minions.

The adventure details a major house in the center of the pocket dimension where most of the interaction with NPCs takes place (including some pretty unsavory nocturnal entertainments) as well as the lairs of the three wizards. These areas are generally pretty small. The main focus of the adventure is character interaction and figuring out how to escape the pocket dimension rather than kicking down doors and looting rooms (although there will probably be some of that too).

There are several ways to win the scenario, and all are challenging enough that the players can feel a sense of accomplishment at getting out of the Valley of the Magi, but not so difficult that a TPK is likely. There is a lot of gaming potential packed into this short book (20 pages plus maps, props, and handouts), and this adventure could easily span several game sessions, with the imminent collapse of the demi-plane building tension as you go. I highly recommend this adventure.

Bonus observations:
1) The DCC rules describe devils and demons as creatures of Chaos, implying an alignment system similar to that in Poul Anderson's Three Hearts and Three Lions, with Law being very much the good guys and Chaos being the baddies. Fate's Fell Hand, however, has two Lawful devils (well, a devil and a devil-kin), implying a more Moorcock-esque alignment system, where Law and Chaos contain both good and evil, and good and evil are beside the point when it comes to cosmic conflict.

2) A major feature of this scenario is a partial Deck of Fates, a tarot-like magical artifact used to assign and control the minions of the warring wizards. The adventure has several pages of cards that can be copied for use as props, and there are also professionally printed cards available (in Spanish) for this purpose. But these are only partial decks; how badass would it be to have a full deck of DCC tarot cards (and some adventure generation procedures) like the tarokka deck published for use with Ravenloft? 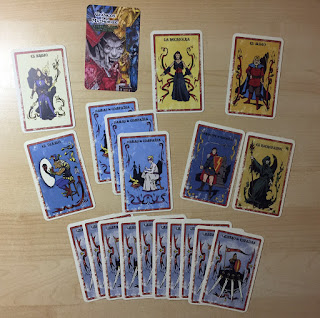 Some Notes on River Placement

As a side note, most of the waterways shown on this map would not generally show up in a campaign map.  It's important to keep in mind, though, as you drill down into smaller area maps, that there should be more rivers, streams, etc added to feed into the larger ones already on the map.
Posted by subhuman at 11:27 AM No comments: