In the olden days, before primeval office supply stores began selling envelopes, when paper was too rare and precious to waste on such things as envelopes, people kept their letters from being read by couriers (either specifically hired as such, or the travelers who casually filled in as couriers in what passed for a postal system at the time) by an intricate series of folds, often quite difficult to replicate, called letterlocking. 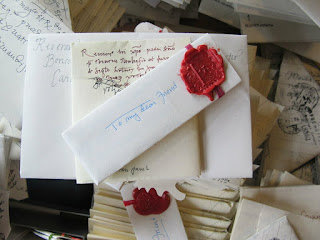 (Atlas Obscura has a few articles about letterlocking:

I see two ways right off the bat of using these in-game:

1) The PCs intercept a message between enemies of theirs and want to know what it says, but also don't want the enemies to know they know.  How can they tease this letter apart and get it back together without the final recipient realizing that it's been compromised?  (Magic probably, although it can be done without, and whichever method is used, getting there should be interesting.)

2) Gamemasters who like making props can have a quest-giver or other major NPC send the PCs a message with an interesting letterlock applied.  For a further twist, perhaps a particular friendly NPC can be known to the PCs as always using an unusual letterlocking method; later, they intercept a message to an enemy of theirs with the same letterlock on it.  (The third link above has three letterlocking methods you can use.  It may be worth experimenting with some origami animals or paper fortune teller type things as well.)